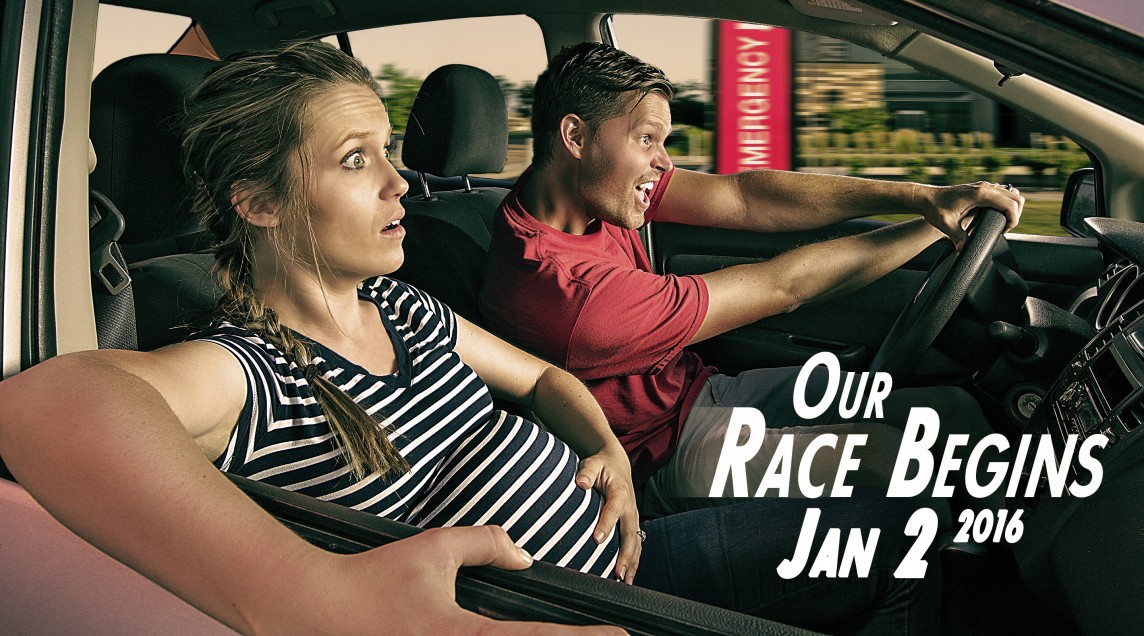 I typically don’t post personal announcements on my photography website blog but since this one is a big deal and I also got to shoot a really cool composite photo for it, I thought it would be a good call.

So, since this is a photography website, let’s talk about the photo and it’s process first. So like many things through my life, I wanted this to be different from the “norm”. So my first thought was to completely underplay our first baby announcement by only posting one simple line with the words “Ashley’s pregnant”. I still think that would be funny but my brother made a good point that if I were to do that, it would make it seem like I’m not excited about being a dad. Which for the first time in my life I can honestly say that I’m ready AND excited about being a dad. Getting to raise a little grom and teach them how to live in the world sounds really awesome. K, back to the photo.

So since I decided I wasn’t going to underplay it, why not overplay it with a really different photo composite. Photo composites are probably my very favorite photos but they take a lot more effort to pull off than a typical single photograph.

Every good photo composite starts with an image in your head that you want to create. It needs a clear plan to achieve that image. This is the opposite of an event photographer who captures what’s happening in front of them. A composite is an art form, it’s something you create, not something that happens. I had a bunch of different ideas pass through my head but the one that eventually stuck was a race theme. This race theme was going to be about me racing Ashley to the hospital which will be pretty dang exciting when it actually happens so why not make an exciting image about that?

Executing your plan can be as hard or easy as you want to make it. It all depends on the complexity of the image, how many people are involved and the location. This one was relatively simple in that we only had 4 living subjects, one of those didn’t make it into the final image (Koa, our puppy) simply because he took away from the final effect. The third, our unborn child, didn’t exactly have a choice and so far has been pretty easy to manage. So that leaves us down to Ashley and I, we ended up shooting it in our car right on the street in front of our house. Then for the hospital background plate, I walked across the street to the hospital right there and shot a bunch of background plate images the following day. Oh and yes, we did fake Ashley’s pregnant belly by buying a maternity shirt and stuffed it with a pillow.

Many composite images require adding many elements together, this one was only 2 different images but it still took up 50 layers in photoshop to get the result you see here. The two images were the car, then the background of the hospital. I’m not going to dive into this too much because it would be a long paragraph but it has to do with some dodge, burn, motion blur and a few other tricks. All in all I think it turned out really cool and no one can say they’ve seen this as a baby announcement before.

Now on to how I feel about becoming a dad.

Mostly right now I’m just glad Ashley and I waited to have a baby as long as we did. Most of my friends I grew up with have 3-4 kids and are getting up to around 10 years old or so. That to me is insane! That means that while they were in college, they had to have a baby, school debt, no or little job…etc. Just sounds too stressful for me. When I get stressed out, I don’t enjoy things and I REALLY want to enjoy raising children (as much as one can). But honestly, I think it’s going to be so cool to have little versions of Ashley and I that I get to teach the world to. Little guys running around that I get to play with all the time sounds pretty awesome. The responsibility part still doesn’t excite me but I’m sure it’s going to be great. I’m sure I’ll have something more insightful to say once they’re here and I’ve had some time to play with them.

Okay, I’ll admit it, I have never been baby hungry. I never understood it. Yes, please give me this small, fragile, gigantic responsibility that will give me my very own poop disaster story that every parent has and loves to share with everyone! I can’t wait to lose sleep, hear him/her cry while I sit there completely clueless and, oh yeah, get a gigantic belly, SUPER! Nope.

For me, I have always been 5-year-old hungry. That has to be the cutest phase and the most fun in my opinion. Oh but wait, there is still that “get-through-the-first-five- years” part of it…hmmm tricky. But kids are miracles and the best thing that ever happens to you! right!? I can’t tell you how many times Shane and I have heard people talk about all the bad things their kids are doing and problems they are causing but then end the sentence with “But kids are great!”. Um, not very helpful. I feel like this is similar to what it was like before I got married and I would hear people always talk about how hard marriage was but then ended it with, “but so worth it!” It would have been so much more helpful to me if people had instead told me how ridiculously fun it is to be married and how it’s absolutely a kajillion million times better than being single. It makes sense to me now why people pressure you into getting married but I always felt like they pressured you to do it because it’s the right thing to do and the next step in life, not because it’s just plain awesome. I feel like it’s the same way with kids, the pressure is there because it’s the next step and a good thing to do. There is not a lot of focus held on all the really great parts of having children. So when parents say, “Oh you’ll understand when you’re a parent, it’s different when it’s your own”…. that means nothing to me when I’m already terrified about having kids. I need more than just that one phrase I always hear. Don’t get me wrong, I do want kids and always have, it’s just been really hard for me to actually commit and take the plunge. So this kid is a BIG step for me. So for now, could you try and focus all of your positive stories at me to alleviate my terror at taking this next step in life!? Thanks!!

Let’s not end it there though. I think what really convinced me to take this next step was God and Shane. I really prayed hard to really WANT a kid if it was right for us. I didn’t want to just do it because I felt like we should and it’s the next step in life. And as I did that, I began to see the positive sides that people don’t always talk about as much. What really changed it for me was when I thought about Shane. I seriously cannot wait to see this guy be a dad and nothing excites me more than having a little grom that is half Shane. When we went to our first ultrasound we were shocked to see something that actually looked like a little baby. I thought it would be too small to see and not be doing much but the little grom was moving!! A lot. We were so surprised. My favorite part was Shane laughing out loud and saying, “Look at the little guy! He’s having a party in there!!” =)

(We don’t actually know the sex yet, we just find ourselves referring to it as a boy)

So long story short, I’m stoked! Shane asked if I would be interested in writing a post about our little announcement and somehow this came out. I don’t say any of this to be negative, I just share it for the purpose of suggesting that you share more of your cool and fun stories about children with those of us who don’t understand what it’s like to be baby hungry and need a little encouragement =)