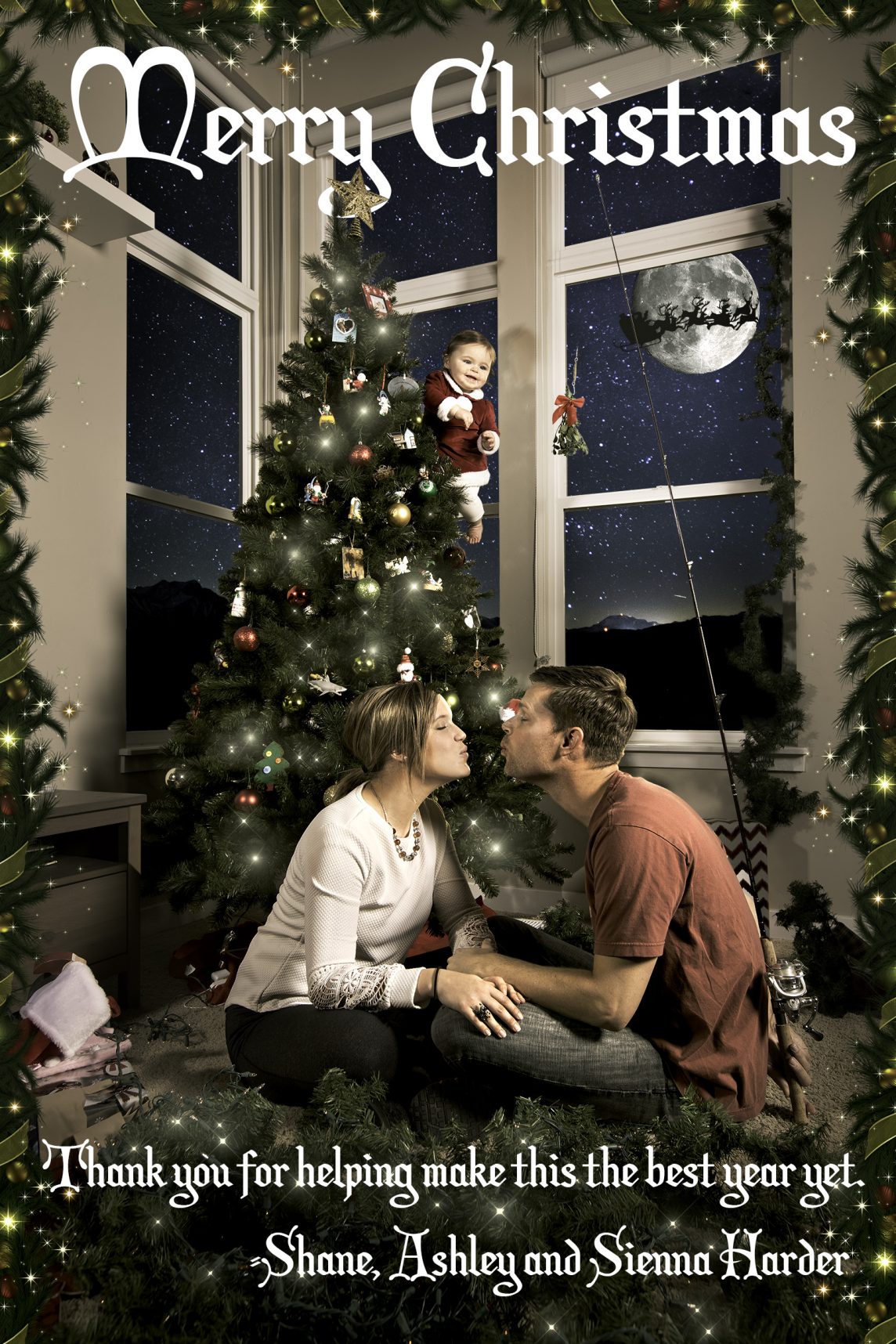 Our Christmas Card, and how I created it.

I enjoy photo composites. I love that they’re a fantastic way to create an entire story from a single image. That’s what I’ve done here, given a perfect visual description of what our lives are like on a day to day, with a Christmas twist. We have Sienna getting into everything, me coming up with new ways to mess with Ashley, and Ashley along for the ride. We also had a plate with Koa (our dog) in it as well but I decided he made the scene too busy (as if it wasn’t already). So that was the concept, now the execution. Get ready for some seriously nerdy photography and graphic design nonsense.

So first we set up the scene, borrowing a few props from neighbors, setting up our Christmas tree in November…etc.

I set up the camera, a 5D mark III (my mk iv was on it’s way and I didn’t want to wait) on a manfrotto tripod with a Canon 16-35 f/2.8 L lens attached and wireless flash transmitter on the hot shoe. I shot the camera at f/8, 1/160, and ISO 100 and 26mm. Why these settings? f/8 is the sharpest aperture on the lens and keeps most everything in focus which is what you want for composites, 1/160 is the fastest sync speed of the camera, ISO 100 keeps things nice n clean and why not, I had all the light power in the world with several bright strobes, then the lens was at 26mm to reduce the distortion and softness at 16mm of the lens while still keeping it pretty wide to capture everything happening in the scene.

Background. Background plates are almost always the easiest, I always recommend everyone take a background plate at the beginning, middle, and end of the shoot if there is any amount of ambient sunlinght entering the scene, that way you can pick which one you like the best, or sometimes the one that has the most significant effect on the other plates so everything merges better.

Sienna. I had the idea of Ashley taking the photo while I hold up Sienna but that didn’t really work all that well since Sienna would just look at her behind the camera, so we needed Ashley to distract her and get her to look at the right spot, the spot I knew we would have the mistletoe. That meant, she needed to use my wireless remote shutter which would normally be fine, but it was low on batteries, so it was working sporadically at best and at really low range. So every time I had our baby in the right spot, the camera wouldn’t fire, Sienna is a really heavy baby, which made for a lot of yelling at the camera to just work, please please work I yelled while my arms were giving out. Now the reason they were giving out is because I was standing behind the Christmas tree, while holding her out as far as I could so I wouldn’t be in the shot. I’m sure you could imagine it was a wonderful scene. But at the end of the day, we got that plate captured perfectly.

Ashley and I. So Sienna was the most difficult, but we were next for sure. We’re self critical “adults” and want to look our best so we had to arrange ourselves in so many different ways to not have a double chin, not look fat, have the light fall on us correctly, have the right facial expression…etc. And once we have a keeper, then we want to try a few different poses. But again, we got a few that worked for the scene.

Koa. Our dog was the easiest. You don’t see him here because I decided he made things too complicated/busy (as I mentioned above) but he was strangely easy to capture. I wanted him to be up on his hind legs trying to get the mistletoe as well. All we had to do was tease him with the mistletoe so he wanted to jump up and bite it, we ended up with like 20 shots in a few minutes.

Next comes the post production. This image ended up with 46 layers in it’s final state. Those comprise of text, masks, color correction and a lot more mask layers. I don’t have the time or will power to describe each step I made and why I made it, but I’ll go over the bigger ones. So we’ve already established that this comes from 3 main plates, but I added another one by masking the windows and compositing a different outdoor scene. So then we have the outdoors, the moon, Santa, the home interior, Sienna, fishing pole, mistletoe, Ashley and I, the stupid wreath looking thing, extra twinkle lights, and finally the text. The first step is to mask all of that and put it in a place that makes sense. Then, we move onto the color correction and lighting adjustments. I wanted it to look fairly de-saturated but not dead.

Then I sent it off to have my friend who owns best copies for less print it off. His website is here: http://www.bestcopies4less.com/ he was great to work with, even hand delivered the proofs and the finals to my door so I could get the adjustments just right. What a champ!!!

That’s basically it, hope you enjoyed it!